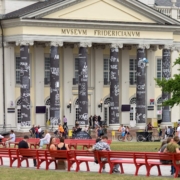 OFF-Biennale Budapest participates in documenta fifteen in Kassel with two exhibition projects and a publication. One of them, a long-term collaborative project with the European Roma Institute for Arts and Culture (ERIAC), showcases artworks in relation to the idea, question, and (im)possibilities of a “RomaMoMA” (Roma Museum of Contemporary Art). OFF-Biennale’s second contribution plays out in close proximity to the Fulda River as a space that oscillates between the concepts of playground, junkyard, and construction site—places of creativity, transgression, refuse, and regeneration. OFF-Biennale’s projects are accompanied by a publication that examines the many aspects of the notion of “independence” as well as the power of collectivity. It is realized by the editorial platform On the Same Page that was initiated as an experimental publication method under the umbrella of OFF-Biennale Budapest, involving the participants and organizers of its 2021 edition.

Documenta fifteen, a large-scale contemporary art event since 1955, takes place in Kassel every five years. Each edition is conceptualized by an invited curator. For doucmenta’s 15th edition the Jakarta-based artist collective ruangrupa was invited to propose the program and the participants. Ruangrupa in documenta fifteen de-centralized organizational and decision-making processes and put in its focus collective practices.

Since January 10, 2022, accusations of anti-Semitism against documenta fifteen were made on the basis of a German blog post: documenta fifteen participants were singled out due to their backgrounds or (alleged) BDS (Boycott, Divestment, Sanctions movement) affiliations. The accusations against anti-Semitism were picked up by the media in Germany, in part without  critically examining the sources, which has escalated into (cultural) political debates and racist attacks against Palestinian, pro-Palestinian, Black and Muslim participants, as well as into transphobic attacks against documenta fifteen participants—these events, however, were hardly (if ever) mentioned by the media.

The ensuing months resulted in a constant dialogue between documenta gGmbh (the institutional body behind documenta), federal and state-level governmental bodies, external advisors, ruangrupa, the Artistic Team, as well as the lumbung members to find solutions for tackling the situation. However, the planned public debate (the series “We Need to Talk”) had to be cancelled. Furthermore, in May, one of the documenta fifteen venues in Kassel was broken into and defaced with what can only be interpreted as a death threat, spurring more debate in Germany as to where the boundaries between hate speech and artistic freedom of expression are.

The debate around documenta fifteen has shifted into a new gear after the unveiling of the work People’s Justice by Indonesian art group Taring Padi, which commemorates the victims of Indonesia’s long and brutal dictatorship under former General Suharto (1967–1998). The work, which features many exaggerated satirical characters, was made in 2002. One of the caricatures, a member of the Mossad, Israel’s secret service, is depicted as a pig. Another figure with fangs and blood-red eyes appears to be an Orthodox Jewish man wearing a black hat with “SS,” the acronym for the Nazi Schutzstaffel. The discovery of these characters within the work erupted into a massive controversy on June 21, just days after the official opening on June 18. The artwork was covered up first, “[as] a monument of mourning for the impossibility of dialogue at this moment,” Taring Padi said in their apology for the controversy the work has caused, stating “It is not meant to be related in any way to antisemitism,”. They said that they often depict soldiers as animals as a criticism of capitalism and military violence. “We are saddened that details in this banner are understood differently from its original purpose. We apologize for the hurt caused in this context,” they added. This monument, we hope, will be the starting point for a new dialogue.” The apology and covering up did not prove enough, and some in Germany called for the group and organizers to be prosecuted. Taring Padi eventually dismantled People’s Justice from documenta fifteen.

Since then, the debate has entered the field of federal politics: on July 7, the Bundestag addressed the controversy around documenta and the question of the limits of “artistic freedom,” also in relation to other much-debated cultural events and institutions in Germany (Goethe Institut, Haus der Kulturen der Welt), and connected these to the long-standing debate about the German position towards the state of Israel (more on this debate you can read here). Although the parliamentary discussion did not result in any form of resolution, the restructuring of documenta, and a stronger control over its artistic content was envisioned and agreed upon. On July 16, documenta announced that documenta gGmbH CEO Sabine Schormann resigned.  A new interim director, Alexander Farenholtz has been appointed as the documenta gGmbH CEO.

Also on July 16, a statement by the supervisory board of documenta und Museum Fridericianum gGmbH made recommendations to the shareholders of documenta to “enter a process of consultation with scholars from the fields of contemporary antisemitism, German and global contexts, postcolonial studies and the arts.” This recommendation was against the opinion of ruangrupa and the artistic team, nor did the supervisory board consult the participating artists. In response, the artists, ruangrupa, and the artistic team of documenta fifteen sent a letter on July 18 to the members of the documenta supervisory board to refuse this recommendation and to take a stand against censorship, detailing also some of the attacks that created a climate of hostility and racism towards the artists. On August 1, in a statement by the shareholders of documenta a scientific advisory panel was introduced: “The scientific analysis of those works of art at documenta fifteen, that have been hinted to use antisemitic imagery or language, is to be carried out while the exhibition is still running.” The shareholders’ statement also referenced an imagery in the project by lumbung artist collective Archives des luttes des femmes en Algérie, which the group defended in their own statement on August 10.

(Summary partly based on the summary of artnet).

OFF-Biennale Budapest, as part of lumbung interlokal and participant of documenta fifteen, stands by the lumbung values, such as inclusivity, collectivity, and knowledge sharing. Following this, we stand with ruangrupa, the Artistic Team, and the entire lumbung community, too, notwithstanding the acknowledgment and regret that Taring Padi’s exhibited banner caused pain—which, we believe, is the result of contextual differences rather than actual antisemitic sentiments. Together with the lumbung community, we believe in the dialogue between different contexts, between different understandings, between different cultures; we condemn antisemitism, all forms of discrimination and hatred, and we also stand for artistic freedom.

PETITIONS IN SUPPORT OF RUANGRUPA AND DOCUMENTA FIFTEEN

Learning and Unlearning with Taring Padi: Reflections on Documenta
http://newfascismsyllabus.com/contributions/learning-and-unlearning-with-taring-padi-reflections-on-documenta/?fs=e&s=cl&fbclid=IwAR260u1OkDaHDX4rh7LoN-QX9raUkQDRKlznAh2yh-s-euYJVU0IjS8HhYw

“Antisemitism in the Arts” discussion

Speech by Ade Darmawan from ruangrupa at the Bundestag: https://documenta-fifteen.de/en/news/speech-by-ade-darmawan-ruangrupa-in-the-committee-on-culture-and-media-german-bundestag-july-6-2022/